Home to the largest Baobab in South Africa 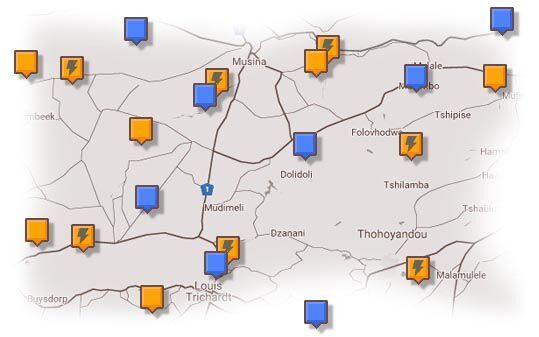 Vhembe, previously known as the Soutpansberg region of the Limpopo Province stretches from the northern boundary of the Kruger National Park along the great Limpopo River. It then follows the Mogalakwena River southwards, cuts across to the east along the Tropic of Capricorn till it hits the Middle Letaba River and then north-east to the top of Kruger. The most prominent feature of the region is the Soutpansberg (Salt Pan Mountain) mountain range which cuts across from East to West just to the North of Louis Trichardt, now named Makhado. The mountain range is in turn named after a large salt pan at the base of its northwestern slopes. This pan has been used as a waterhole by game since time immemorial, and salt has been mined there from the Stone Age until the present.

Agriculture in the region is varied. Most of the region consists of vast plains of bushveld, where there is a lot of cattle and game farming. Farmed crops in the region are mainly subtropical, consisting of cotton, paprika, bananas, avocados, pineapples and litchis. There are a number of tea and coffee plantations in the northeastern Venda area. The main centers are Messina, the only crossing point into Zimbabwe, Makhado and Thohoyandou, all three of which are served by airports.

In the far northwest of the Vhembe region, where the Shashe River joins the Limpopo, is situated the little known ancient city of Mapungubwe. This ancient city lies on top of a 300 metre long hill with vertical 50 metre high sandstone cliffs. Locals regard the hill as a taboo place and turn their backs on it at the mere mention of its name. They believe that those who climb the hill place their very lives in jeopardy. On New Year's Eve back in 1932 a handful of explorers climbed to the top of the hill and found iron tools, pots and copper beads. There was all the evidence of a once-powerful nation. The group discovered a grave-site with many gold ornaments. A skeleton was found adorned with gold wire. Altogether more than 7000 ounces of gold were recovered from the hill. Carbon dating puts the site as being from the 11th Century. The site is now a World Heritage Site.

There is a wide variety of ecotourism in the Soutpansberg. It is estimated that some 80% of cattle farming has been converted into game farming. There are numerous game lodges and accommodation can range from tents to luxury lodges, some of which can be very expensive. About 40 kms from Messina at Tshipise there is an Aventura resort, which offers comfortable accommodation in a hotel or 130 rondavels. Facilities are very good and include tennis and bowls. There are several hot mineral pools open to the public. The resort has a restaurant and bar and is situated in its own Nature Reserve where visitors can view giraffe, kudu, waterbuck, nyala, tsessebe and sable. Tshipise is an excellent break point for people travelling through to Zimbabwe.

The most obvious flora of this region is the Baobab, and the largest of these in South Africa grows on a farm near to Messina. It is 26 metres tall and has a girth of more than 19 metres. This tree has been found to have a wide variety of uses. The leaves can be boiled and used as a vegetable, the seeds can either be sucked or ground and roasted to make a coffee-like drink, the pollen to make glue and the wood to make rope and paper.
View Town List
Shows all the towns with accommodation
View $elect Stays List
Shows listings offering a 15% discount to members